View Full Report
Creating a seamless experience for the end user is the result of a visionary approach in global connectivity services from KDDI TELEHOUSE...

Connectivity is the core strength of KDDI TELEHOUSE which seems apt for a company that was conceived in the same year as the first text message was successfully sent to a Motorola beeper.

KDDI TELEHOUSE is a single source provider for colocation, cloud migration and connectivity services. According to General Manager, Ryo Kurita, the company predicted a shift in data management 30 years ago. Today, it has a global footprint of more than 40 data centres offering support for startups to Fortune 500 companies - showing its visionary strategy has been successful.

While the world was perfecting online networks, KDDI TELEHOUSE was perfecting the infrastructure to support the increasing demand for network operations they predicted was coming.

KDDI TELEHOUSE is one of the leading providers of carrier-neutral data centres from Shanghai to Paris and with personnel around the world including San Francisco where Kurita spoke from his office about the importance of a rock solid digital infrastructure to support data - which is getting bigger every day.

“Connectivity is our core strength,” said Kurita who pointed out the company now has a presence of over 40 data centres covering 10 countries including London, New York and Frankfurt.

Ongoing investments by $48 billion Japanese parent company, KDDI, ensures it is one of the most financially stable providers in the industry. KDDI is a Global Fortune 300 Company and continuously invests in its facilities and services.

Kurita commented there can be some confusion over KDDI and TELEHOUSE. “They are basically the same company,” he said. “KDDI is the parent company of TELEHOUSE and the second largest telecom carrier out of Japan. It provides comprehensive global ICT solutions such as system integration, cloud migration, Internet of Things (IoT), network services and related IT services. TELEHOUSE is the brand name of the data centre arm and originally established in New York in 1989 and London Docklands opened as our first purpose-built colocation facility in Europe in 1990,” he said.

As more enterprises seek ways to re-invent themselves online and stay agile to survive the fallout from the pandemic there are more calls than ever for faster data speed - a call KDDI TELEHOUSE is answering.

KDDI TELEHOUSE provides a neutral, scalable peering infrastructure that assures a reliable stable internet connectivity which is a simpler option for faster connections between network, content and cloud providers. Many of the world’s major Internet Exchanges (IX) are established and operating in TELEHOUSE facilities worldwide.

The TELEHOUSE Docklands campus is known as the home to the London Internet Exchange (LINX), the world largest internet exchange carrying a huge amount of European and global internet traffic. Across the waters, TELEHOUSE Paris Voltaire hosts multiple IXs including France IX, and TELEHOUSE America operates NYIIX in New York, Los Angeles and Philadelphia. All are significant hub locations for the backbone of the global internet.

Similarly, in Japan, TELEHOUSE Tokyo Otemachi collocates the largest IX in Japan, JPIX, enabling an ecosystem of providers that result in quicker, more stable connectivity to the average person on the street and in their homes.

“One of our iconic campuses is London Docklands where we strategically established a carrier neutral data centre and the most connected data centre in the world,” said Kurita. “Throughout our whole 30 year journey we've focused on positioning ourselves to be a connectivity data centre provider, enabling an ecosystem that our customers can leverage to easily connect with each other, and then enjoy rich connectivity in our facilities.”

With many of the world’s largest cloud providers already established in TELEHOUSE Data Centres, global businesses can benefit from these low latency and cost-effective connections. The KDDI TELEHOUSE ecosystem also provides a platform for its customers to connect with more than 3,000 business partners in the TELEHOUSE ecosystem. The private network ensures accelerated access to applications hosted in public, private or hybrid clouds.

Commenting on what the competitive edge is for KDDI TELEHOUSE, Kurita re-emphasised that “connectivity is our core strength. Customers can connect with all kinds of ISPs, carriers, contents providers and hyperscalers. Many people who use smartphones, or enjoy online services such as SMS gaming or streaming services, are all accessing cloud services - some without realising it,” he said.

“Many people are accessing cloud services knowingly or unknowingly by using Apple or Google products to some degree. Being able to connect with those cloud and content providers, as well as carriers or ISPs in a faster and easier way is a critical component for all service providers who run their businesses over the internet. I think that is a reason why our customers choose TELEHOUSE - to be able to provide a better user experience for their end users,” he said.

As one of the most widely connected ecosystems globally, TELEHOUSE Carrier Interconnect brings together more than 750 connectivity partners - such as leading global Internet Exchanges and Tier 1 carriers - with all the major mobile, cloud and content providers as well as enterprises and financial services companies.

Outlining the importance of partnerships with hyperscalers, Kurita said that from a data centre provider perspective, some of their data centres like London Docklands or Paris Voltaire were selected as AWS Direct Connect or Microsoft Azure ExpressRoute locations.

“It is not only a data centre provider relationship, we also support these huge cloud businesses in multiple ways. For example with TELEHOUSE Cloud Link, we provide a platform for companies to access multiple cloud providers, including Google, AWS, and Microsoft. Another example is last year when we launched AWS Wavelength in Japan showing how KDDI TELEHOUSE can bring connectivity and cloud together. We have AWS Wavelength equipment located in our data centres right at the edge of our mobile network in Japan. This enables AWS users to develop and launch their applications at the edge of the network to leverage the ultra low latency and high bandwidth over our 5G network. These are just some examples of how we are going to strengthen such partnerships with these hyperscale cloud providers.”

KDDI TELEHOUSE leverages decades of experience in technology to anticipate where their customers will be tomorrow. Their Tokyo research and development engineers are investing in developing technologies that will be game-changers in our future.

“We help many enterprises adapt to make their business sustainable and efficient now and in the future,” said Kurita.

“One good example is in the IoT arena. Our IoT solution was adopted by some major automobile companies and our SIM cards are embedded into their automobiles on a global scale. For instance, KDDI has collaborated with Toyota Motor North America and AT&T who provide 4G LTE connectivity. It’s adding a feature of data communications to the legacy car function itself - our platform is helping those automobile companies to collect and analyse the behavior of how they drive. I think that is a very exciting business model shift.

On the subject of global acquisitions, Kurita said, not limited to the data centre business, but for KDDI as a whole, they were always open to this as long as it had synergy with their existing service portfolio.

Looking ahead, Kurita outlined some of the main expansion plans for TELEHOUSE. “We’ll be launching our new Dockland campus, TELEHOUSE South in early 2022 which is just 300 meters from our existing London Docklands campus. A network of dark fiber cables will facilitate integration with the existing Dockland campus. This location enables customers to benefit from low latency and access the highly connected environment and dense ecosystem.

“We are also adding a couple of more megawatts capacity in Paris and Frankfurt as well and during the last year we also opened a large Tokyo data centre campus - what we call “Tama 5” - that gives us plenty of space to build even more data centre capacity in the future.

“As a connectivity data centre provider we'll continue to expand our data centre portfolio on a global scale as well as enhancing our connectivity related services such as Cloud link and AWS Wavelength,” he said.

Casting his thoughts to the future, Kurita said: “I think everybody agrees mobile edge computing is a buzz word in the data centre and the cloud industry at the moment because more real time edge transaction is needed by the nature of the business and cloud providers want to get closer to their end users to realise seamless transactions with any devices.

“So more of the data needs to be processed locally and that may eventually require more data centre capacity even in tier two or tier three cities. That may also require more well established connectivity even in some emerging countries. I predict that data centre demands are going to be on a more micro level and be spread around more locations with the combination of a shorter latency path,” he said.

The parent company of TELEHOUSE is KDDI, a global fortune 300 Japanese telecom and system integration provider.

Established in 1953, KDDI has been operating as a leading telecommunication provider in Japan for over 60 years serving more than 60 million users and providing its own successful brand of handsets.

With about 45,000 employees worldwide, KDDI has more than 100 offices in 28 countries around the world, supporting clients locally. With a diverse portfolio of services, KDDI owns and operates a number of global subsidiaries to ensure their clients have access to the best performing end-to-end ICT infrastructure.

KDDI maintains Network Operations Centers (NOC) in its TELEHOUSE sites to monitor the network infrastructure of customers to ensure their performance is uninterrupted.

TELEHOUSE Docklands North became Europe's first purpose-built neutral colocation facility when it opened in 1990 and is the most connected data centre in the world.

London Internet Exchange (LINX) traffic has been moving through the carrier-neutral TELEHOUSE campus since 1994 due to the number of carriers present in the data centre and the level of latency.

In August 2016, TELEHOUSE Europe added to the facility and opened a $177 million North Two data centre of 24,000 square metres which is the only UK data centre to own a 132 kV on-campus grid substation that is directly connected to the National Grid, reducing transmission losses and improving power density and service continuity.

TELEHOUSE London North is listed as most populated data centre in EMEA by the data centre rankings working with more than 530 network carriers, ISPs and ASPs.

1987: TELEHOUSE America established with Dr Yasuo Fukata, who is appointed as Company’s First President and CEO.

1990: TELEHOUSE Docklands was established and would become the home of the London Internet Exchange.

2000: TELEHOUSE expands in Asia with Hong Kong and Seoul.

2012: TELEHOUSE expands further in Europe with a Frankfurt location. 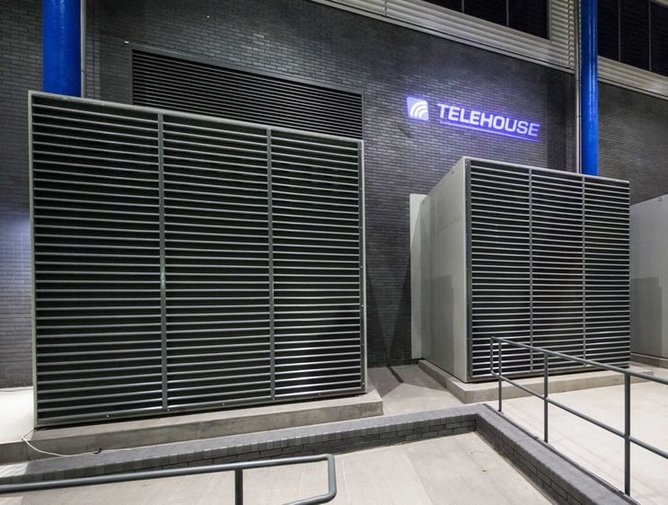 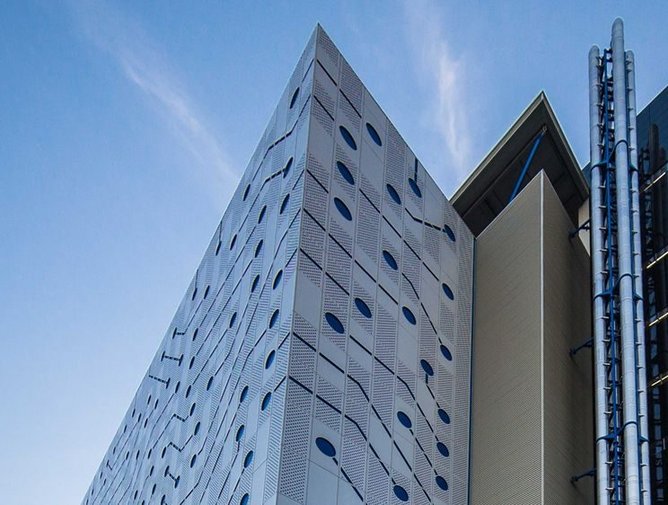 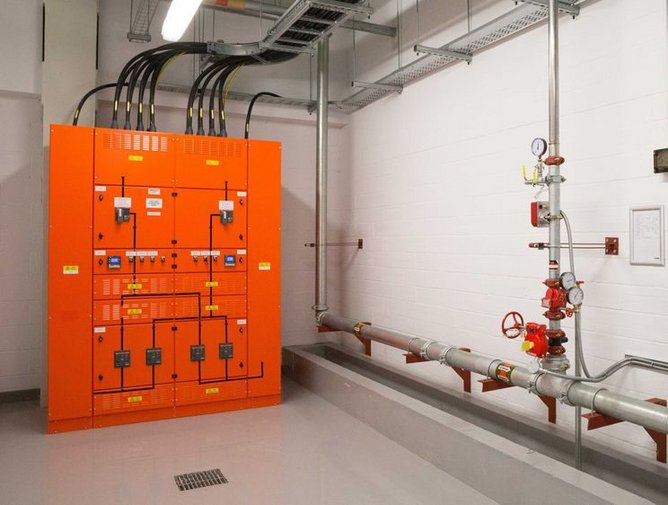